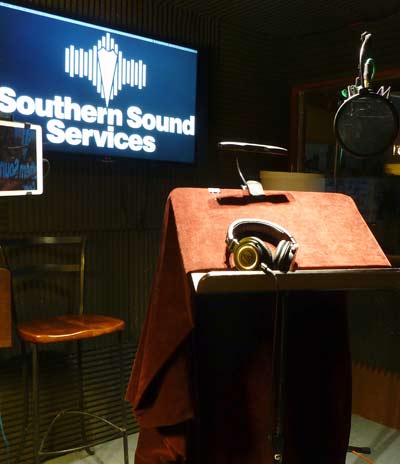 We specialize in recording voiceover, narration, and many types of voice acting for a variety of media. We can also record interviews.

Voiceover, voice acting, and narration is a special talent unto itself. A voice actor has to convey meaning and emotion using only their voice. A voiceover can be a character in a film or documentary. Sometimes seen but often the voiceover character is never shown. It can be used as a storytelling device as a narrator. It is often used in film noir as the main character explaining or setting up a scene.

Animation uses voice acting for every character that has a voice. Sometimes a single voice actor can be the voices of several to dozens of characters within a single show.

Voiceovers are an integral part of radio programming and advertisements. Everything from station identification and advertising to storytelling and entertainment. Radio DJ's often use voice acting as characters to give an illusion there are more people in the studio.

Voiceover and narration are a principal component of educational programming as well. Often narrating the story in documentaries and news clips. Sporting events are a big user of voiceover explaining and commenting on the action taking place. Game shows, talk shows, and variety shows often use voiceover to introduce guests or contestants and even introduce the show.

Voiceover can also be used to translate languages so the listener can understand what is being said. Phone prompts and on-hold messages are also a big use of voiceover. Many toys can "speak" when prompted or a button is pushed. All of that is recorded in studios like ours. Audiobooks and podcasts also use voice acting and narration to convey the story they are trying to tell.